The Allies and the Axis

This afternoon, I was once again considering not only the babbling from 45, and the babbling of those who won't quite oppose him... and being marginally associated with the PR world, I thought about branding.

The Nazis don't want to be called Nazis.  (As I side note, keep reminding yourself that Neo-Nazi doesn't mean "not quite Nazi."  It means new Nazis.  Doesn't mean they're significantly different from the old Nazis, except they speak English now not German.)  The wave Nazi flags, chant Nazi slogans, take actions that the brownshirts would recognize immediately -- but they're not Nazis?  And the Fascists, too, don't wanna be Fascisti anymore.  They wanna be called the Alt Right. 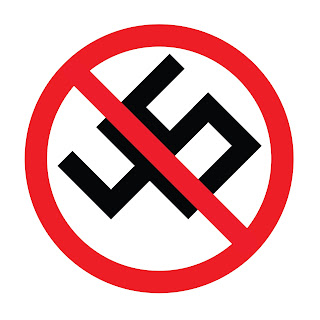 And to generate some sense of equivalency to those of us who oppose them, they want to call us the Alt Left.  Some, foolishly in my opinion, have chosen to accept that title, that branding.  I won't.  Nazis have been applying names to those they wish to destroy as long as they've existed.  Not gonna do it.  They don't get to define this battle.

Then I was reminded of George W Bush's phrase from early this century, "The Axis of Evil."  At the time he was referring to Iran, Iraq and Syria I believe.  But he used the particular term "Axis" because of it's previous use, referring to our enemies in World War II.  The Nazis in Germany.  The Fascists in Italy.  And the militarists in Japan.

And what do we face now?

Let's do our own branding.  The Nazis, the Fascists, the modern American brownshirts -- they're the Axis.  We fought the Axis before.  We can and will fight the Axis again.

And who are we?  Well, of course, the Allies.

You'll recall that though the Allies were united, we weren't all united about what we were for.  But we were sure as hell united in what we were against.  I'd wager heavily that Roosevelt and Churchill were never in love with old Joe Stalin.  The various resistance groups from the smaller, conquered countries weren't overjoyed to have to depend on Americans and Brits to get their countries free again -- much less having to ally with Stalin, who had his own conquering agenda.  Then there's Asia; we ended up in extended wars fighting the folks with whom we'd allied against Japan.

But the Allies were (eventually) all against the Axis.

And it was and is very clear, the Allies were the good guys, the Axis were the bad guys.  The new "very nice people" wave the flags of the bad guys my Dad went to fight back when.

So, my new Branding.  We're the Allies, and damn proud of it, even though we don't all agree about everything.  And the Axis?  I suppose they're proud, too.  They're certainly proud of the President of the Axis of Evil now, aren't they?

Let's let the Axis be proud of being losers once again.